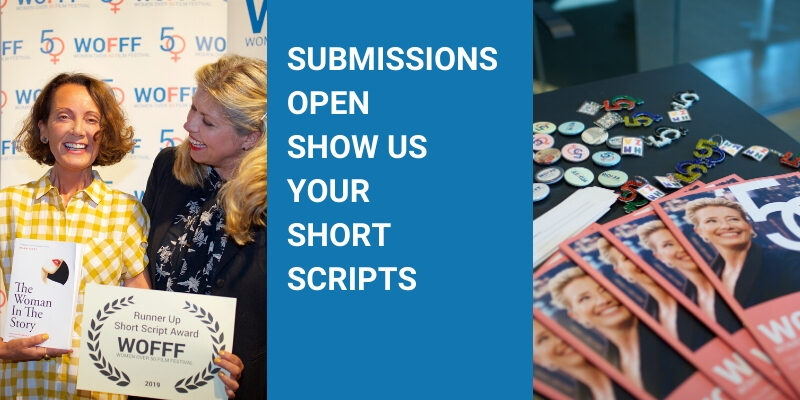 “It’s a privilege to be judging the WOFFF Best Short Script Prize for the second year. I’m excited to discover some fantastic older female characters on the page – or scripts penned by fabulous older women filmmakers! Short scripts are not necessarily easy to write, but done well, they are utterly impactful.“

Other 1st place prizes include:

How to submit your short script

This is a competition for completed short drama film scripts up to five minutes in length with a woman over 50 at its centre or written by a woman over 50. Submissions are open from 22 June 2020. The deadline for this competition is 25 July 2020 or the date when 50 scripts are received by WOFFF, whichever is sooner.
Click on the Filmfreeway below to read the full details of the competition and how to apply.

Last year’s winning script about a woman saying goodbye, LOVE IS was by Dylanne Corcoran.

“A powerful and brave short about love and loss told with efficient and evocative storytelling. We really appreciated the up close and personal style, as we watch Helen come to terms with her final goodbye to John. The ‘before and after’ structure, with the actual ‘real’ goodbye off-screen, is a powerful device to convey the emotional impact of the final moments. There is a sophisticated use of location (the bland nature of the hotel room) and of visual imagery that conveys the underlying humanity in the imminent goodbye.“

Anna Murphy’s script LUCY AND THIS GUY WITH DIAMONDS was the WOFFF19 Runner-Up script. Anna attended the festival and received her certificate and a copy of the book THE WOMAN IN THE STORY by judge Helen Jacey.