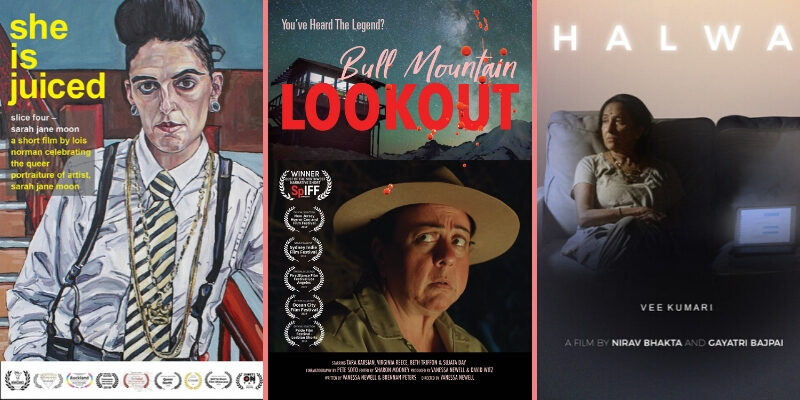 Welcome to our LGBTQ+ WOFFF watchalong, co-hosted by ELOP (East London Out Project) filled with a fabulous selection of films made by and about older queer women and a live online Q&A and discussion on 24 June.
Some of the films are available for 24 hours only, some are available for a couple of days and some are available for longer. Full details of all films and dates available to watch are below.
We’re delighted to have Film Talks from some of the filmmakers introducing their films – from filmmakers in Canada and the US.
On Wednesday 24 June 2020 we’re hosting an online chat with some of the filmmakers from 7:00 – 8:00PM (BST). We hope you’ll join us and share your thoughts about what you’ve seen.
To join in the online chat you need a password. Please email LGBTFORUM@ELOP.ORG for this.
Many of the films and Film Talks are available to view before our event on 24 June so feel free to watch ahead!

All times are British Summer Time  (BST) and are approximate. Full links below the viewing schedule:
Any time from 18 – 24 June, watch the films below.
On 24 June:
7.00PM Join the conversation online about the films. We’ll be talking to some of the makers of the films below and you are invited to join in and ask questions and tell us what you thought of the films. Use the hashtag #PrideWatchalong and tag us @WO50FF so we can welcome you into the conversation and so others can find your tweets.
To keep everyone safe, you need a password to join in the online chat on 24 June. Please email LGBTFORUM@ELOP.ORG to request the password.

Hello from the Women Over 50 Film Festival and welcome to our WOFFF -ELOP Pride Watchalong. We’ve got a fabulous line-up of short films made by and about older gay women to help celebrate Pride 2020.

Here’s Ali Grant to tell us about going back to school in her 50s, going on dyke marches and her short documentary AND ON THE SEVENTH DAY SHE PLAYED SOCCER.

Film: AND ON THE SEVENTH DAY SHE PLAYED SOCCER

On any given weekend in Vancouver, Canada, more than 4,000 women compete in the non-professional Metro Women’s Soccer League. Sunday after Sunday, women in the “Classics” divisions push their middle-aged bodies to the limit, for neither fame nor fortune. Why do they do it? This short documentary, by Ali Grant, not only answers that, it will make you want to get out there and join them!

Vee Kumari, the Executive Producer (EP) and lead in the drama HALWA, introduces the film for us.

In HALWA by Gayatri Bajpai and Nirav Bhakta, empty-nester Sujata Chopra learns about the passing of her childhood companion’s spouse on Facebook.
This film was available to view here from 18 – 24 June.
You can watch the trailer below.

INVISIBLE WOMEN by Alice Smith is a documentary exploring the untold story of England’s North West’s LGBTQ past over the last 50 years through two women’s incredible journey rebellion and activism.
Angela Cooper and Luchia Fitzgerald have spent the last half a century fighting for their rights as women and as lesbians.
This film was available to view here from 18 – 24 June.
You can watch the trailer below.

A horror comedy by Vanessa Newell about a Girl Scout troop leader who discovers the terrifying truth about the legend of Bull Mountain.
This film was available to view here on 24 June only.
You can watch the trailer below.

This film by Lois Norman explores the work and world of New Zealand/British portrait and figurative painter, Sarah Jane Moon, as she uses her brush to make visible London’s Queer community: into the limelight and onto the canvas.
This film was available to view here from 18 – 24 June.
You can watch the trailer below.

Sabien and Anna have what many might say is an unusual relationship. In this gentle documentary by Jeehye Kay Jang we learn about this alternative companionship, and celebrate the life of these two older Dutch women – Sabien and Anna.
This film was available to view here from 18 – 24 June.

Mickey Few, the director of INTRODUCING RACHEL tells that the minute she saw Rachel she knew she wanted to be friends with her, wanted to hear her stories and capture one of them on film.

Rachel is a 74 year old feminist activist who has been a fighting for queer and feminist rights since her early 20s until today. In this documentary by Mikey Few Rachel tells us about the usual protest she was a part of in 1978.

On 24 June 7:00 – 8:00PM (BST), join us along with some of the filmmakers for a virtual Pride chat about these LGBTQ+ films.
To keep everyone safe, you need a password to join in the online chat on 24 June. Please email LGBTFORUM@ELOP.ORG to request the password.

This Watchalong is part of FilmFeelsConnected, a UK-wide cinema season, supported by the National Lottery and BFI Film Audience Network.  You can explore all films and events here at filmfeels.co.uk
If you have watch any of the films in this programme or joined the WOFFF-ELOP LGBTQ+ PRIDE Q&A, please fill out this out 5-minute online feedback form.