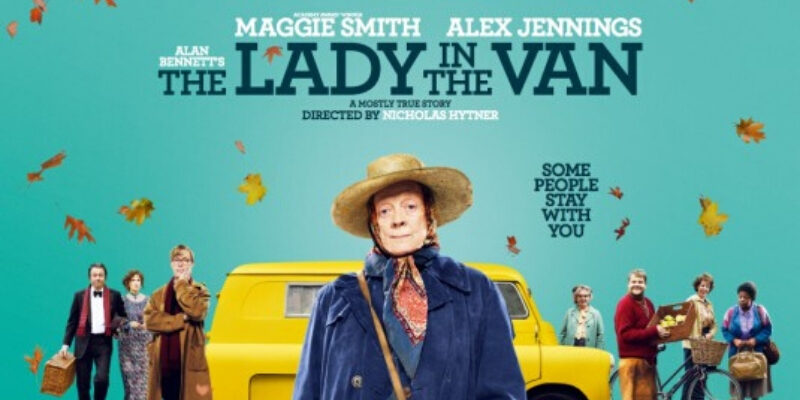 Welcome to our COIVD-19 WOFFF watchalong, co-hosted with ReframedFilm on Thursday 16 July 2020. We hope you enjoy all the films and that you’ll join us on Twitter around 9.00PM (BST) for a chat about what you’ve seen.

All times are British Summer Time  (BST) and are approximate. Full links below the viewing schedule:
7:00PM Intro to the programme from WOFFF
7:05PM Film Talk with filmmaker Clare Holman
7.10PM WOFFF short film ONLY THE LONLEY
7.30PM Tonight’s feature film THE LADY IN THE VAN
9.15PM Join the conversation on Twitter about the films. Use the hashtag #WOFFFWatchalong and tag us @WO50FF so we can welcome you into the conversation and so others can find your tweets
10:00PM Round off the evening with a WOFFF Film Talk by Malcolm Green, followed by his short film EDEK

Hello from the Women Over 50 Film Festival and welcome to our WOFFF Watchalong. This week’s we’ve got three films to share with you about older women’s relationships with friends and neighbours.
Our feature film THE LADY IN VAN is a true-life comedy which follows the stranger-than-fiction relationship between an elderly ex-nun, ex-concert pianist, Miss Shepherd (Maggie Smith) and the playwright Alan Bennett. Miss Shepherd lives in a broken-down van and is invited to park her van temporarily in the writer’s driveway for a few months. Some 15 years later, she’s still there.
In ONLY THE LONELY for Elspeth Morris life has become intolerable. She’s surrounded by people she has nothing in common with. She feels alienated and abandoned.
In EDEK a Polish Holocaust survivor and an American rapper deliver a Hip Hop message, a fusion of prose, music and rap.

FILM Clare Holman joins us to tell us about her film – ONLY THE LONELY.

In this short drama, LONELY THE LONELY by Clare Holman, unhappy, opinionated, racist Elspeth finds herself in an unlikely friendship with her neighbour, Gurmeet. This film will be available to watch here until 27 July 2020.

THE LADY IN THE VAN

Nicholas Hytner’S THE LADY IN VAN tells the story, mainly based on real life, of Mary Shepherd (Maggie Smith) an elderly woman who lived in a broken-down van in playwright Alan. Bennett’s driveway for 15 years.
For viewers in the UK, click the image below to access the film free on BBC iPlayer. Viewers outside the UK can access the film on dvd or it may be available on an on-demand platform.
This film is available on the iPlayer till 29 July 2020.

EDEK director Malcolm Green joins us to tell us about his film and his thoughts on life, music, love, tolerance and COVID-19. He thought we’d edited down his talk, but we loved it all! Hope you will too. Malcolm’s a diamond. Enjoy his talk. Image of Malcolm at WOFFF18 in our festival home, Depot, by Sharon Kilgannon.

In this cross-genre film, Janine Webber, born Janina Monat, in 1932 in Lvov, Poland (now Lviv in the Ukraine) collaborates with a young US rap artist named Kapoo, to tell one of the world’s darkest stories in a new and thought-provoking way.

There won’t be a watchalong next week as this is our final watchalong in this series. Thank you so much for joining us on these Lockdown screenings and chats we’ve been co-hosting with Reframed Films since 27 March. We’ve loved having your company.

Cinemas are beginning to open after Lockdown so many of you will be able to watch films on the big screen again now. We know, however, that many others of you in the WOFFF community don’t feel confident or safe venturing into cinemas yet and we hope to still be able to offer you some online films and events in the coming weeks and months.
The Women Over 50 Film Festival is going online this year and we hope see you online at WOFFF20 from 25 to 26 September.
We’ll have lots to share with you so please do stay in touch with us via this website or if you haven’t already, sign up to our newsletter here and keep up to date with our online festival plans.