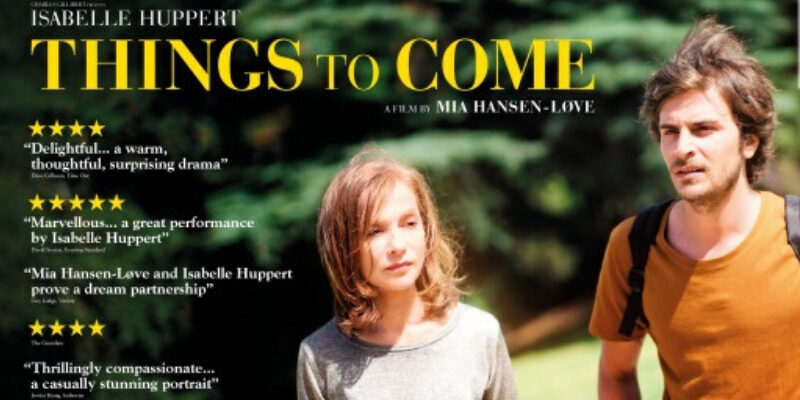 Welcome to our COIVD-19 WOFFF watchalong, co-hosted with ReframedFilm on Thursday 9 July 2020. We hope you enjoy all the films and that you’ll join us on Twitter around 9.00PM (BST) for a chat about what you’ve seen.

All times are British Summer Time  (BST) and are approximate. Full links below the viewing schedule:
7:00PM Intro to the programme from WOFFF
7:05PM Film Talk with filmmaker Nicola Hawkins
7.10PM WOFFF short film ON HOLD
7.30PM Tonight’s feature film THINGS TO COME
9.15PM Join the conversation on Twitter about the films. Use the hashtag #WOFFFWatchalong and tag us @WO50FF so we can welcome you into the conversation and so others can find your tweets
10:00 PM Round off the evening with a Film Talk from Deb Ethier and her WOFFF19 short animation THE SEAMLESS CUP SOCIETY

Hello and welcome to our WOFFF Watchalong. Here’s Claire Vaughn from Reframed Film to introduce our three films about middle-aged women’s work, loves and lives. In our feature film, the French drama THINGS TO COME by Mia Hansen-Løve, philosophy teacher Nathalie (Isabelle Huppert) juggles work, divorce, her mother’s illness, children and the possibilities of new romance. In ON HOLD a busy middle-aged woman visits her ailing father, and in the animation THE SEAMLESS CUP SOCIETY we learn about the secret signs and spells middle-aged women are privy to.

Director Nicola Hawkins joins us from Newfoundland to tell us about her film – the experimental dance short ON HOLD.

ON HOLD by choreographer and visual artist Nicola Hawkins is a striking movement piece filmed at the rugged Ferryland Lighthouse, Newfoundland, which distills the tenderness and honesty of a middle-aged woman and her ailing father. This experimental dance is performed by dancer-storyteller Louise Moyes and her father, actor John Moyes.
This film was available for 24 hours from noon on 9 July. Trailer below.

Nathalie (Huppert) is a philosophy teacher at a Parisian high school. She’s married with two children and divides her time between her family, former students and her mother. When her husband announces he is leaving her for another woman, Nathalie must reinvent herself and establish a new way of living.
This is a Reframed Film pick and unfortunately it’s not available free for viewers in the UK. You can buy the dvd from Hive, or you can watch it if you have a subscription to MUBI (which has a 7-day free trial period if you sign up just now) or you can rent it on Amazon.

Director Deb Ethier joins us from Ontario to tell us about her film – the short animation THE SEAMLESS CUP SOCIETY.

Using the wonders of maths and science, an anonymous group of older women change the course of menopausology.

Our next film, on Thursday 16 July, will be the final one of this watchalong series. We’re signing off with a film we hope will make you smile – THE LADY IN VAN by Nicholas Hytner which tells the story, mainly based on real life, of Mary Shepherd (Maggie Smith) an elderly woman who lived in a broken down van parked in his driveway for 15 years.
People living in the UK can click here to get free access to the film on the BBC iPlayer.

WOFFF Watchalongs will be coming to an end after 16 July for now. Cinemas are beginning to open after Lockdown so many of you will be able to watch films on the big screen again. We know, however, that many others of you in the WOFFF community won’t feel confident or safe venturing into cinemas yet and we’ll still be here to offer your some online films and events in the coming weeks and months.
The Women Over 50 Film Festival is going online this year and we hope see you online at WOFFF20 on 25 and 26 September.
We’ll have lots to share with you so please do stay in touch with us via this website or if you haven’t already, sign up to our newsletter here and keep up to date with our online festival plans.