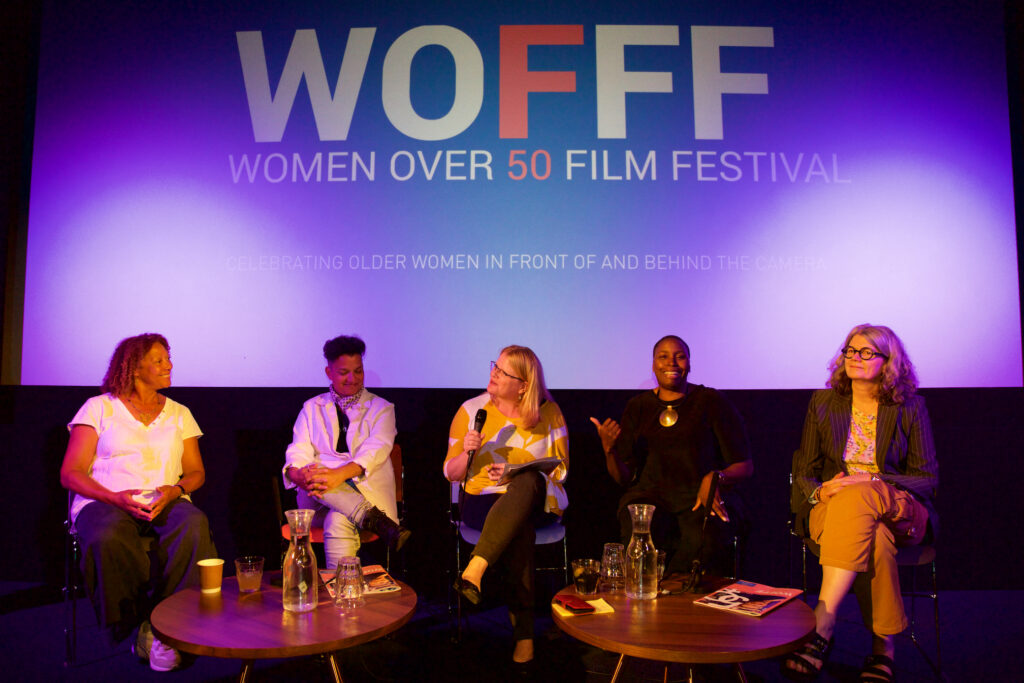 Everything you need to know about Women Over 50 Film Festival

Women Over 50 Film Festival (affectionately known as WOFFF) champions and showcases the work of older women on screen and behind the camera with an annual short film festival and year-round events and film screenings.

Our biggest and ultimate goal is to achieve equality and parity for older women in film. We do this by spotlighting women over 50 who are making film and championing all filmmakers who are centring women over 50 in their work.

We address the ageism and sexism many women face in the film industry. We screen films celebrating older women on both sides of the camera. We believe inclusive spaces to watch films together and conversations between generations of women can help make older and younger women feel less isolated and feel more connected.

We’re a friendly, inclusive bunch and would love you to become part of our community. Everyone is welcome at WOFFF. Anyone can submit a film to WOFFF or attend our events: there’s no upper age limit and all genders are invited to submit films and come to our festival.

WOFFF aims to showcase outstanding work of older women on screen and behind the camera; create a film community centred around older women and help combat isolation and loneliness in older women.

At WOFFF we always aim to be, Accessible, Age-Positive, Collaborative, Empowering, Knowledgeable and Welcoming.

In 2016 we screened 44 international short films, hosted an all-female panel event and a beginners’ filmmaking workshop, as well as awarded prizes for the top five films. Find out more here.

In our 2017  festival we screened 55 international short films, hosted an all-female panel event and 8 workshops, along with awards for the top films, including an Audience Choice Award. Find out more here.

WOFFF18 saw us in our new home, Depot, in Lewes, East Sussex.

WOFFF18 programme has full details of the 2018 festival and our WOFFF18 Festival Report has details of all the films which took home awards.

We returned to Depot for WOFFF19. Read more about our films, workshops, lecture and panel event, filmmaker Q&As and networking events here.

Nuala O’Sullivan is the founder of Women Over 50 Film Festival.

Nuala has written plays for theatre and has been a series writer for the BBC Radio 4 drama ‘Brief Lives’. For the BBC World Service, she created, wrote and produced the interactive, online soap opera, ‘The Flatmates,’ for English language learners.

In 2014 she wrote and produced a short film, ‘Microscope,’ and it was her experience of submitting this short to film festivals and attending festivals that brought home to her how underrepresented older women were on both sides of the camera. She set up Women Over 50 Film Festival as a positive and practical response to this lack of visibility so that older women in film would have a platform dedicated to them and their work.